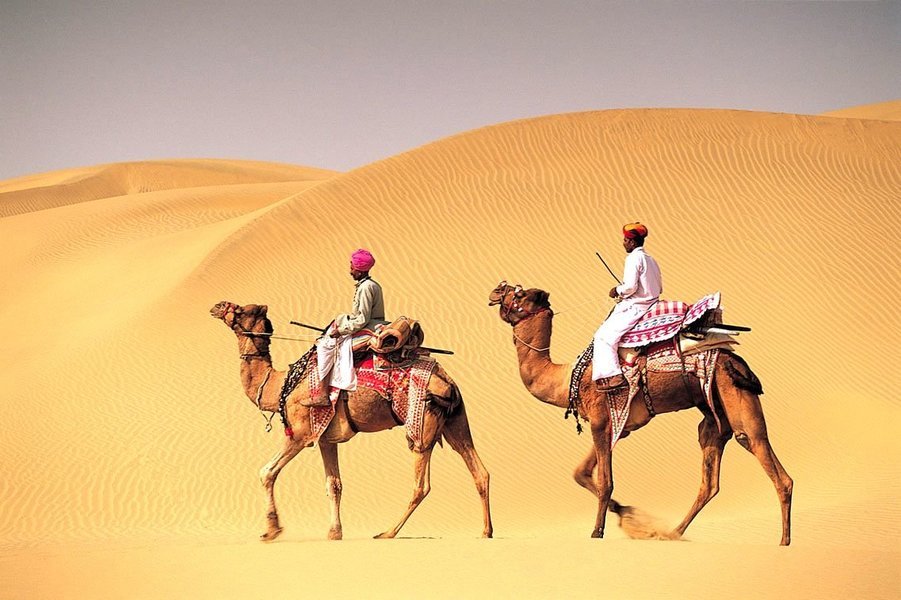 After breakfast at hotel proceed for sightseeing tour of Old & New Delhi: OLD DELHI - A sight-seeing tour of Old Delhi would entail visiting the Raj Ghat - the memorial site where Mahatma Gandhi was cremated; Jama Masjid - the largest mosque in India. NEW DELHI - An extensive sight-seeing tour of New Delhi would include a visit to the Humayun's Tomb, the Qutub Minar, a drive along the ceremonial avenue - Rajpath, past the imposing India Gate, Parliament House, the President's Residence and would end with a drive through the Diplomatic Enclave.Night stay at Hotel in Delhi.

Morning after breakfast checkout hotel & drive to the city of Taj, Agra & transfer to hotel. Start the sightseeing of Agra by visiting the magnificent Taj Mahal one of the of the world surely the most extravagant expression of love ever created. 20,000 men laboured for over 17 years to build this memorial to Shah Jahan's beloved wife. It's a wealth of white marble and semi-precious stone- undoubtedly the highlight of your tour. Also visit the Agra Fort - the rusty and majestic red-sandstone fort of Agra stands on the banks of the river Yamuna and the construction was started by Emperor Akbar in 1566. At the Diwan-I-Am (hall of public audience), a colonnaded hall of red-sandstone with a throne alcove of inlaid marble at the back, the Emperor heard public petitions. At the Diwan-I-Khas (hall of private audience) where marble pavilions with floral inlays lend an ethereal ambience, the Emperor sat on his gem-studded Peacock Throne and met foreign ambassadors and rulers of friendly kingdoms. Evening free to explore the Agra's rich heritage of handicrafts in its markets. Night stay in Agra.

After breakfast checkout hotel & drive to Jaipur- the fabled "pink city" of the desert named after Jai Singh, the former Maharaja of Jaipur. This is the only city in the world symbolizing the nine divisions of the universe through the nine rectangular sectors subdividing it. The palaces and forts of the  yesteryears, which were witnesses to the royal processions and splendors are now living monuments en-route visiting Fatehpur Sikri-a perfectly preserved red sandstone "ghost town" which was the estranged capital of Mughal Emperor Akbar, built in 1569 and deserted when its water supply failed. Arrive Jaipur in late evening & transfer to hotel. Night stay in Jaipur.

After a relaxed breakfast proceed for a morning excursion to Amber Fort. Elephant ride ascent to the fort. AMBER FORT PALACE - Amber is the classic romantic Rajasthani Fort Palace. Its construction was started by Man Singh I in 1592, and completed by his descendent Jai Singh I. Its forbidding exterior belies an inner paradise where a beautiful fusion of Mughal and Hindu styles finds it's ultimate expression. Continue sight-seeing. CITY PALACE - A delightful blend of Mughal and traditional Rajasthani architecture, the City Palace sprawls over one-seventh of the area in the walled city. It houses the Chandra Mahal, Shri Govind Dev Temple and the City Palace Museum. JANTAR MANTAR - This is the largest and the best preserved of the five observatories built by Jai Singh II in different parts of the country. This observatory consisting of outsized astronomical instruments is still in use. HAWA MAHAL - The ornamental facade of this "Palace of Winds" is a prominent landmark in Jaipur. Their five-storey structures of sandstone plastered pink encrusted with fine trelliswork and elaborate balconies. The palace has 953 niches and windows. Built in 1799 by Pratap Singh, the Mahal was a royal grandstand for the palace women. Night stay in Jaipur

Morning after breakfast drive to Jaipur Airport-Flight Jaipur to Udaipur. Udaipur an oasis in the desert state of Rajasthan. Arrive Udaipur. Assistance on arrival at Udaipur airport and transfer to hotel. Evening at leisure. Night stay at hotel in Udaipur.

Morning after breakfasts at hotel. Today you will go for full day city sight seeing tour of Udaipur. The city is built in 1559 A.D. by Maharaja Udai Singh and has been described as the most romantic spot on the continent of India by Col. James Todd. Visit the City Palace museum, the Jagdish temple, Sahelion Ki Bari (Queen’s resort for their friends) Bhartiya Lok Kala Mandir (Folk art museum) and the Pratap Memorial. Evening at leisure. Night stay in Udaipur.

Full day at leisure on beach.

Full day at leisure on beach.

Morning at leisure. Check out @ around 1200 HRS. Transfer to airport as per your onward flight timings.