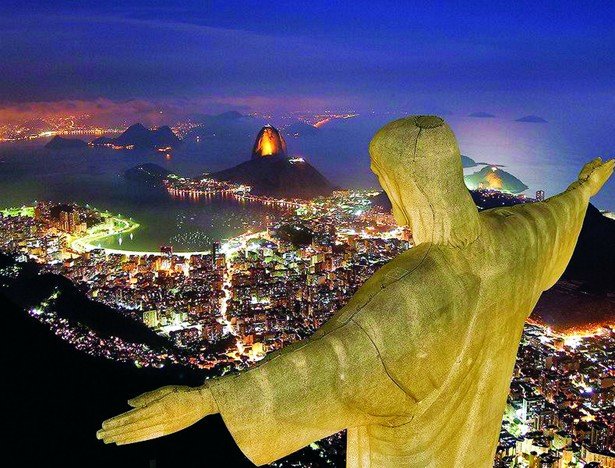 6 Nights 7 Days Available on request Brazil
Inclusions/Exclusions
What we'll give. What we won't

Welcome to South America’s largest and most populous country. Rio de Janeiro is the second largest city in Brazil, on the South Atlantic coast. Rio is famous for its breathtaking landscape, its laidback beach culture and its annual carnival. On arrival transfer to your hotel

After breakfast, enjoy a full day city tour of Rio. Ascend on Corcovado Mountain by train to visit one of the world’s most famous landmarks, the gigantic statue of Christ, the Redeemer.  Then proceed to Cascatinha, Tijuca Forest, to the top of Corcovado Mountain. Cidade Maravilhosa, “the marvelous city” as it is known to its residents and the rest of Brazil, is also the most beautiful city in the world. As a tropical resort, Rio offers miles of golden beaches, including, Ipanema and Copacabana, two of the most famous stretches of sand in the world.  The tour continues with the visit to Metropolitan Cathedral, samba stadium and view of architectonic    monuments of Rio. Overnight in Rio (Meals: B)

We will take a boat tour of Guanabara Bay, viewing the incredible “Wonder City” from its most famous bay. Based on water volume, Guanabara Bay is the largest bay in the world, and has several islands such as the Governor’s Island and Snakes Island. To the west, lies Rio de Janeiro, and facing east – the municipal district of Niteroi. Various sights and landmarks such as the neighborhoods of Botafogo, Flamengo, Urca, Sugar Loaf Mountain, Fort Sao Joao, Flagstone Island, Santa Cruz Fortress, Rio-Niteroi Bridge and more will be seen as we depart from the Marina da Gloria. Overnight in Rio (Meals: B)

Fly to Sao Paulo, on arrival transfer to your hotel. City tour of São Paulo, the world’s second largest city & South America’s industrial powerhouse! The city of São Paulo is full of surprises. It is the largest German manufacturing city in the world, and contains great architecture, such as this masterpiece by Oscar Niemeyer, architect of the capital, Brasilia. (Meals: B)

Day 05 – Sao Paulo – Iguassu Falls BrazilToday, after breakfast at the hotel fly to the natural wonder known as the Iguassu Falls located on the border of Brazil, Argentina and Paraguay.  Upon arrival checking in the hotel. Day at leisure (Meals: B)

Today, after breakfast we proceed to enjoy the Iguassu Falls National Park, touring the Brazilian side of the Falls. You will walk with the guide, descending a walkway, contemplating the lovely waterfalls in all of nature’s exuberance, with panoramic views of both sides – Brazilian and Argentinean.   Reaching the highest elevation then descent into the Brazilian side lookout, this provides magnificent photo opportunities and views. Overnight in Iguassu (Meals: B)

Transfer to the airport to board the flight for your next destination.  (Meals: B)

This morning enjoy a Meeting of the Waters tour, where the Rio Negro & Amazon run side by side, afterward go for a nature hike through the jungle, then lunch featuring typical Amazonian dishes. Visit to the home of local Amazonian residents with an opportunity for piranha fishing. (Meals: B)

Transfer to the airport to board the flight for your next destination. (Meals: B)

If any additional requirements such as Groups request, add nights, Single room supplement, to add infant, child, or any extras.

Kindly send email to support@thekiwivacations.com, We will get back to you within 12 hrs.