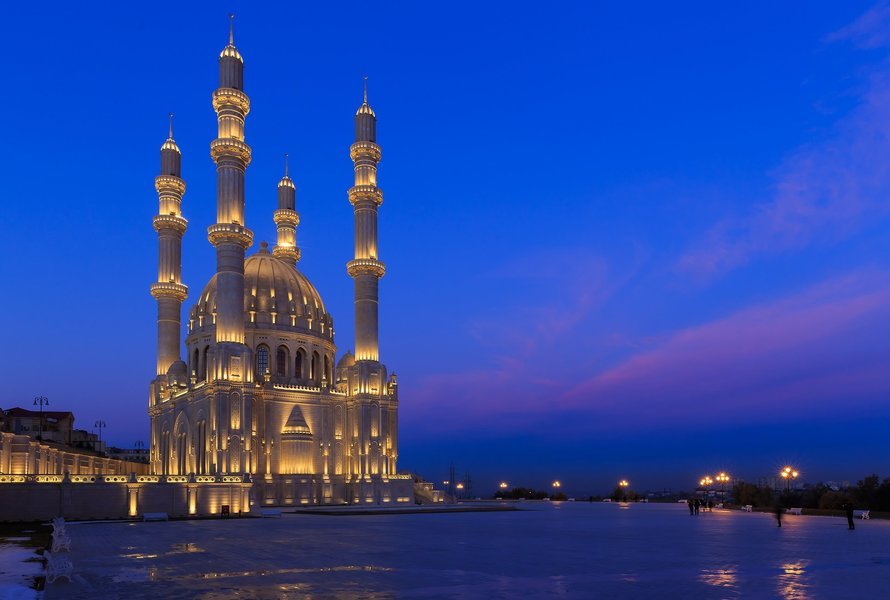 Highlights
What makes this tour special

“Welcome to Azerbaijan». After the checking at the passport control and customs at the Heydar Aliyev airport you will be met by “Turizm.Az” local guide and transferred to your hotel by car.

Overnight at the hotel.

You will visit Azadlyg Square which is a large parade square facing the Seaside Park stretching along the Baku Bay. Ater you will proceed to the medieval fortress of Baku the Old City (“Icheri Sheher”) of the 15th – 17th centuries, Maiden Tower of the 12th century, Dzhuma Mosque, Shirvan Shakhs Palace complex and Medieval Caravansary of the 15th century. Later you will go to the Medieval Market Square and Handmade carpets workshop-art studio.  You will have a walk along Baku Boulevard, the second largest one in the Europe.

15:00 The Heydar Aliyev Center is a 619,000-square-foot building complex in Baku designed by Iraqi-British architect Zaha Hadid and noted for its distinctive architecture and flowing, curved style that eschews sharp angles. The center is named for Heydar Aliyev, the leader of Soviet-era Azerbaijan from 1969 to 1982, and president of Azerbaijan from October 1993 to October 2003. The Center houses a conference hall (auditorium), a gallery hall and a museum. The project is intended to play an integral role in the intellectual life of the city. Located close to the city center, the site plays a pivotal role in the redevelopment of Baku. Visit of State Carpet museum.

10:00 This day you will visit the Gobustan reserve and Absheron Peninsula. Gobustan (the territory of Gobu) is famous for its archeological monuments. Travel 30 miles southwest of Baku along the Caspian shore to the volcanic desert, where rocks covered with drawings stand amidst chaos of stones and mountains. There are more than 4,000 rock drawings left by artists of the Neolithic period. Visit of Bibi Heybat mosque and oil fields in Lokbatan vilage.

14:00 – 15:00 Lunch time (not included). Visiting of the Temple of Fire Worshippers’ – “Ateshgah” in the Village Surakhani in 45 km from Baku.  Then you will see and spectacular phenomenon of Absheron – Burning mountain – Yanar Dag. Standing 30 km from the center of Baku, on the southeastern out skirts of the village of Surakhany on Absheron Peninsula is the temple of Zoroastrians – Ateshgah (literally “The House of Fire”, “The Place of Fire”). Later you will visit one more special place – Yanar Dag, a natural gas fire which blazes continuously on a hillside on the Absheron Peninsula. It is a phenomenon definitely worth seeing.

Overnight at the hotel

Breakfast at the hotel

Breakfast in the hotel. Transfer to the airport.

If any additional requirements such as Groups request, Single room supplement, to add infant, child, or any extras.